Here is all the baby news and details!!!!!

~ WHEN AND HOW I FOUND OUT WE WERE PREGNANT: During the first week of January, I had a couple days where I didn't feel all that great off and on. I took a pregnancy test and it was negative, so I figured that I was just overly tired or had a small tummy bug. I went to my friends house to hang out one Saturday to catch up and watch the Seahawks game. She had just recently found out she was pregnant and I was excited to hear about her baby news. While I was there, she pointed out that I had gotten up to use the restroom as many times as she had... and she asked if I could be pregnant. I said it was due to all the water I drank that day (which was true, I drank a ton of water.... because I felt nauseous off and on. But I still thought it was because I was overly tired or something). That Tuesday, January 14th, I woke up with a feeling that I very well could be pregnant. I had STRONG menstrual-type cramps all night long, yet my period hadn't started yet. After my husband left for work, I took a pregnancy test and it instantly showed a positive result. Let me tell you, after a few years of trying to get pregnant (and after seeing so many negative results), I felt so much joy I smiled from ear to ear when I saw that pink plus sign. I needed to tell my husband I was pregnant, but wasn't sure if I should call him to tell him over the phone, or ask him to come back home, or wait until he was home from work at the end of the day. I went downstairs to throw some food in the crock pot and as I was slicing some veggies, I heard the front door unlock. I ran to the front to see my husband walking in through the door. I asked what he was doing and he said that he had forgotten his laptop, (which he never does) so I blurted out "Good, because I'm pregnant!"

~ FIRST TRIMESTER: After we found out we were pregnant, I was excited that I overall felt pretty good. I had some days where I felt a little icky, but nothing bad. My mom had bad morning sickness when she was pregnant with me, and I was hoping that I would be lucky enough to not have to deal with that. I quickly started to become really sensitive to food smells. (My husband said I had a nose like Wolverine). By week 6 I started to get so incredibly nauseous all the time... and always felt on the verge of getting sick. I ended up having to take 6 weeks off of work from my salon because the smells of color and lightner, etc., would make me so nauseous, and I couldn't work feeling like I could get sick on my clients at any moment. I lost about 8lbs from being so sick during my first trimester. We finally got to see our sweet baby on an ultrasound at around 9 weeks. Baby looked like a little gummy bear! It was so amazing to see its little heart flickering on the screen!

~ SECOND TRIMESTER: I went back to work about the beginning of my second trimester. I still wasn't feeling great, but the nauseousness had subsided quite a bit. Slowly I was able to eat more regularly and get some energy back. After a little while I started to feel pretty great!  I started gaining back the weight I had lost during the first trimester. I quickly discovered how comfortable maternity clothes were! HAHA. I stocked up on jeans, t-shirts, tanks, dresses and leggings. We didn't post on Facebook or tell extended friends and family that we were pregnant until we were about 16 weeks. Here was our announcement photo: 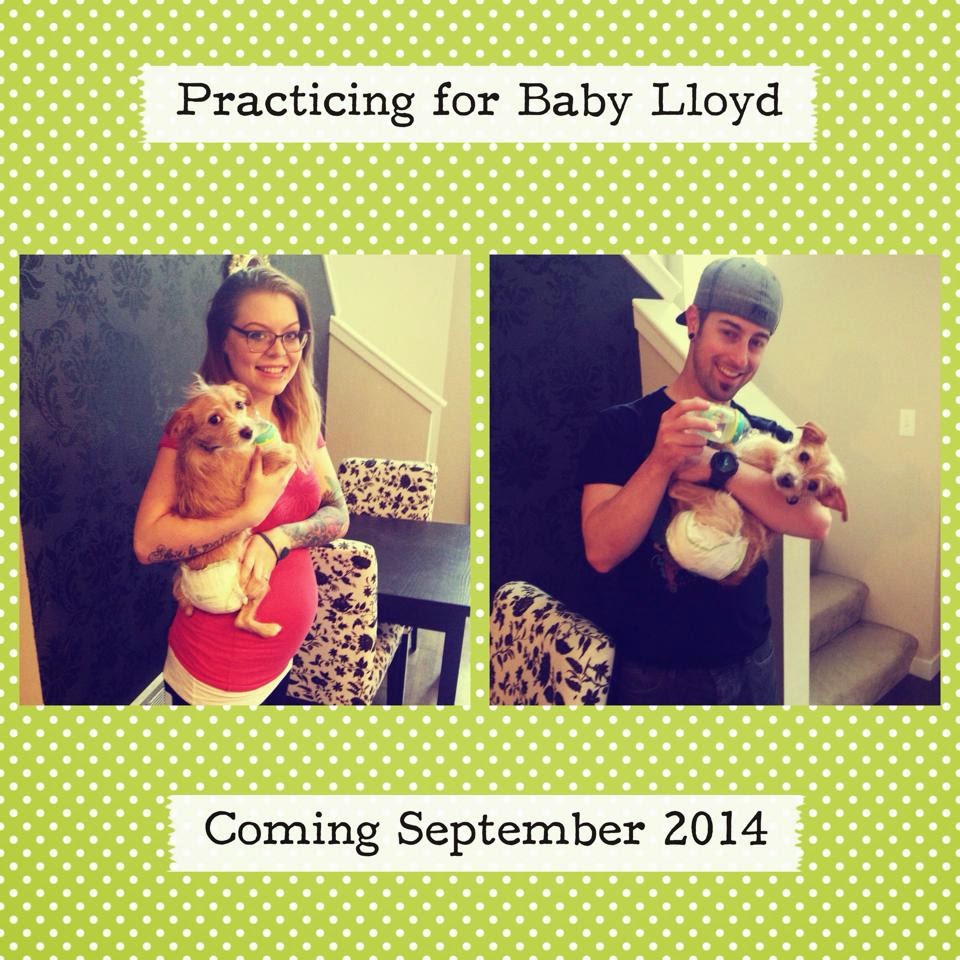 We decided we wanted to find out the gender of our baby at my 19 week ultrasound. We were SO excited to see if we were having a little he or a little she. The majority of the pregnancy I had thought we were having a girl. I'd sometimes get random feelings that it was a boy... but overall, I thought it was a little girl most of the time. Any time I asked my husband what he thought we were having, he'd say he had no idea.... but that he would be happy with either. The morning of the ultrasound he told me that he thought it was a girl, so that made me think even MORE that we were having a girl. We decided to find out at the ultrasound, but wait to have a Gender Reveal Party that weekend to announce to our family what gender we were having. We did, however, call both sets of parents after our ultrasound since they live out of state and wouldn't be able to make it to the party. We had a cupcake cake made with blue or pink frosting in the middle of the cupcake, so when our family took a bite, they'd see either blue or pink to let them know what we were having. 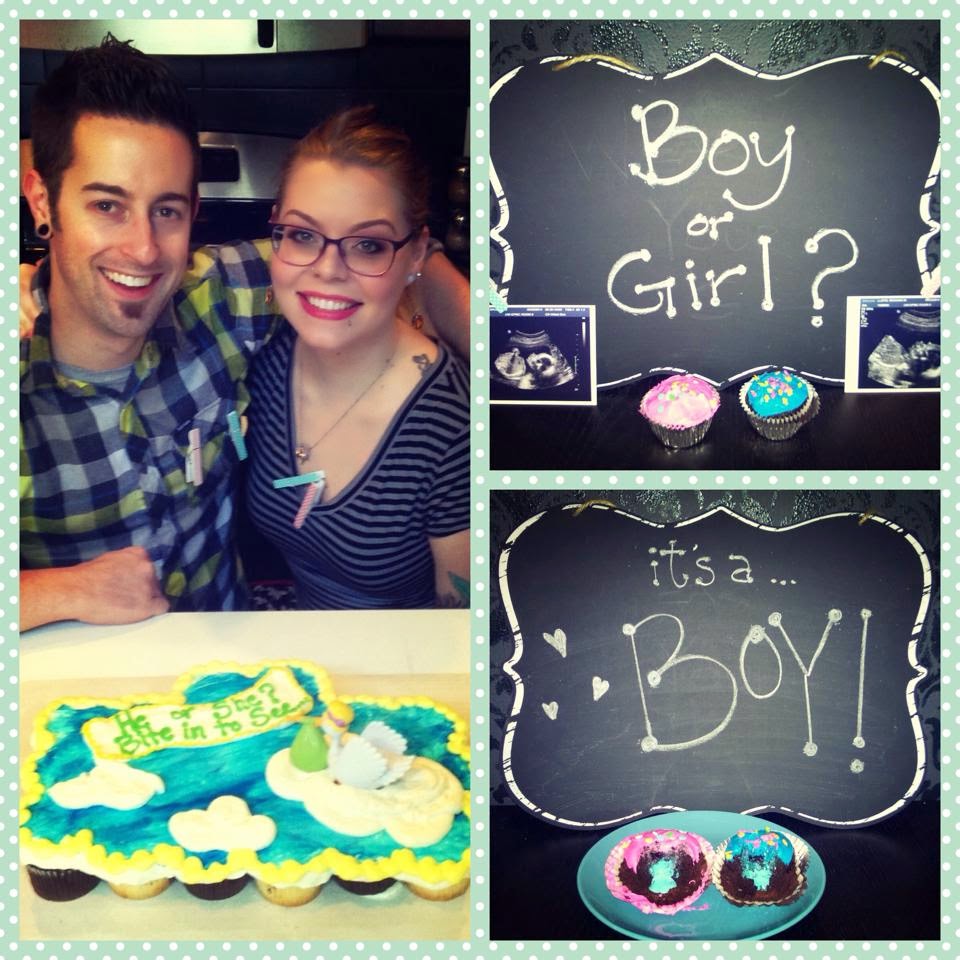 We were so excited and surprised to find out that we were having a BOY! It was hard to keep it a secret for 4 days until our reveal. We also picked out a name at this point, Riker Scott. We like names that are a little different, but not too strange. (Plus, as kids, we both watched Star Trek with our fathers, and there was a character whose name was William T Riker... so its kind of a little nod to our childhood). The next few weeks went by pretty fast, as we were busy working, registering, picking out paint colors and furniture for the nursery.

~ THIRD TRIMESTER: So your third trimester starts at 28 weeks, and let me tell you, it didn't hold back - lol. Right away I started having really bad back pain, I couldn't sleep at night between the leg/calf cramps I'd have and being overheated all the time (as well as having to wake up multiple times to go to the bathroom). I became even more sensitive than I normally am to the summer heat. I'd frequently get very overheated at work, even when the AC was on. My sensitivity to food smells even came back a little off and on (so far). It was a bit of a shock for me - I didn't think all that discomfort would happen until I was a little further along! Riker moves a lot now. Sometimes at work I don't notice it as much because I am constantly moving, which can lull baby to sleep... so he sleeps most of the time I am at work. But in the morning, when I get home from work and when I am trying to fall asleep, he moves a ton! I just recorded a video of my belly moving all crazy because he was swimming laps in there or something. And when we went to a move just a few days ago, during a very loud and active scene in the movie - he went nuts moving around (I'm guessing due to the sound or the vibrations). It was so uncomfortable I almost had to use labor breathing through the discomfort.

Today I am 29 weeks and 2 days, and I know that there will be many more experiences I'll go through, so I'll be sure to share that with you all very soon... :)