Hi friends! So, a few weeks ago, my poor hubby had an icky cold and just felt awful. I decided to pick him up some pho on the way home to try to help him feel a little better. As I watched him eat it, it made me REALLY want some, but there is no guarantee pho will be gluten free - in fact, a lot of the time, pho restaurants do not use gluten free broth. So I became determined to make my own yummy gluten free pho!

I put some chicken in the crock pot with some organic gluten free chicken broth and some spices (salt, pepper, parsley...) and let that do its thing. (I had to work that day so I just put it on an 8 hour setting). When that was done, I put a cup or two chicken broth in a large glass microwave-safe bowl. I diluted the broth with a little bit of water (I think I was afraid it might be too salty). I popped that in the microwave for a few minutes until it was nice and HOT! While that was cookin', I boiled some water for my gluten free brown rice noodles. I picked up a box that had plain noodles (made in organic green tea), and they were super yummy. 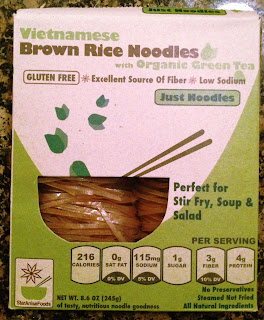 *They also have noodles with a little bit of seaweed,  garlic noodles and shiitake mushroom noodles!
(I found these noodles at Central Market)

While the noodles boiled, I shredded the chicken into decent sized pieces then threw it in the bowl of broth. I drained, quickly rinsed, then added the noodles to the broth as well as some bean sprouts, basil, cilantro and lime juice. 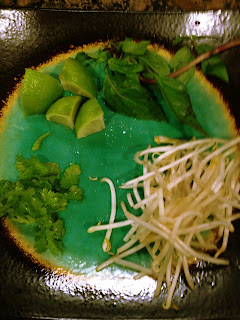 Since I didnt have any plum sauce, or whatever it is that you add to the broth (haha), I added some Mrs. Bragg's Liquid Aminos. Its a yummy, natural soy sauce full of healthy amino acids. The pho turned out SOOOO good. My hubby and I shared a BIG bowl and even he thought it tasted pretty great! 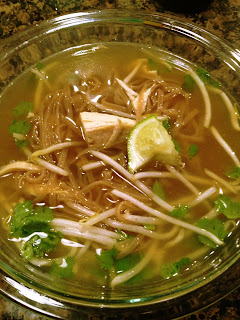 This recipe would be so easy to alter to use your favorite meats, veggies and toppings/extras. You could easily use beef, shrimp, add some veggies... the sky's the limit!!!

Give it a try and let me know what you think!