I pinned this recipe on Pinterest a while ago, and although I don't necessarily like the ingredients in the recipe, I knew OTHER people would love it (I'm just a weird one and don't like Reece's or carmel...).

I made this first for my husband and his coworkers, and he said they loved it... so I decided to make it for my brother's bday gathering last weekend. I was actually surprised by how much everyone liked it! Its similar to a recipe found on the Chocolate Chex box, but this recipe has some additional yummy treats added to it.

Here are some pics and the recipe for the "Chex Mess" (as my husband named it) - it will be a HIT if you make it - I promise!!! 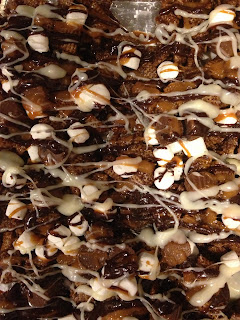 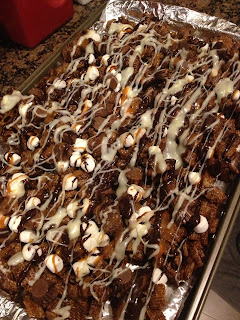 2. In microwavable bowl/measuring cup, microwave brown sugar, butter and corn syrup uncovered for 1-2 minutes, stiffing after each minute, or until melted and smooth. Stir in baking soda until dissolved. Pour this carmel mixture over cereal, stirring until evenly covered. Microwave for 3 minutes, stirring after each minute to distribute the carmel mixture more evenly. Spread on cookie sheet and let cool for around 10 minutes, or until cool to the touch. Break into bite sized pieces - its kinda like a brittle! (The first time I did this, I think I lost track of time and it cooled for an extra few minutes, which made it easier to break into chunks. The second time I did it  I was in a hurry and let it sit for just those 10 minutes and it wouldn't really break apart very well, it just crumbled, so I decided not to break it apart just yet... I'll let you know what I ended up doing).

3. Make sure chex mixture is cool to the touch (so candy doesn't melt). Evenly sprinkle the peanut butter cups and mini marshmallows over the mixture.

4. In small microwavable bowl, microwave carmel baking bits and cream uncovered for 1 minute, or until chips can be stirred smooth. Use a spoon or fork to drizzle over snack. If the caramel is very warm still, the drizzle will be a bit runny. If you want a thicker drizzle, just continue to stir it a little until it cools a bit, then drizzle. Microwave the milk chocolate chips the same way (I actually added about a tablespoon of cream here too, because the chocolate wouldn't melt well), and drizzle over mixture. And now (you guessed it), microwave the vanilla/white chocolate chips the same way (and yes, I added some cream here too), and drizzle over mixture. QUICKLY SPRINKLE COARSE SALT ON MIXTURE WHILE THE CHOCOLATES AND CARMEL ARE STILL WARM. (I actually sprinkled a little bit of salt on after the carmel, then after the milk chocolate, and then after the white chocolate... just so I knew it would stick better).
5. Refrigerate until set. Break apart (here is where I just broke that second batch apart) and store in tightly covered container.  (I don't know if mine didn't have enough time to set up, but as people ate it it was still a little drippy - the chocolate never fully hardened (but like I said, I was in a rush that second time). So just be aware that it could be a little messy!

It makes quite a bit!!! And it will last for days if you tightly cover it when not eating it.
The pic below is just one batch. 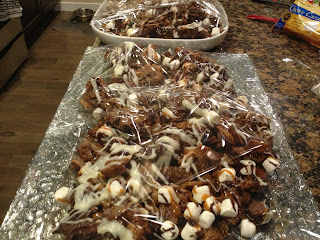 Please let me know how you like it, or if you make any modifications!

Happy snacking!
~B
Posted by Brianne at 4:22 PM

Email ThisBlogThis!Share to TwitterShare to FacebookShare to Pinterest
Labels: Recipes